The outcome document of the Conference was submitted to the meeting of the Executive Bureau of the Council of Arab Ministers of Telecommunications and Information at its thirtyfirst session (Beirut, 2 February 2012), which expressed its support for the establishment of the Forum. At its twenty-seventh session, held in Beirut from 7 to 10 May 2012, ESCWA voiced its determination to continue its efforts to establish the Forum in partnership with the League of Arab States, and adopted resolution 306 (XVII) in that regard.

Similar to the global Internet Governance Forum (IGF) launched by the United Nations Secretary-General in 2006, following the second phase of the World Summit on the Information Society (WSIS), held in Tunis from 16 to 18 November 2005, the Arab IGF brings together all stakeholders in the field of Internet policies, including Governments, the private sector, civil society, technical practitioners, the academic community and regional organizations. The Arab IGF offers a platform for these actors to engage in an open dialogue on international Internet-related public policy issues.

The Arab IGF is aimed at establishing a mechanism for the implementation of the Arab Regional Roadmap for Internet Governance, and it provides a platform for dialogue on issues related to the Internet and to the priorities of the Arab region, in accordance with the outcomes of WSIS. Furthermore, the Forum constitutes an effective mechanism for all stakeholders to exchange their points of view.
The following are the key objectives of the Forum:

The Arab IGF is aimed at addressing a number of key issues related to Internet governance in the Arab region, including the following:

ESCWA and the League of Arab States serve as umbrella organizations for the Arab IGF, and the National Telecommunication Regulatory Authority (NTRA) of Egypt was designated as its secretariat.

In 2013, the Executive Bureau for the Joint Coordination of the Arab IGF was established, with ESCWA and the League of Arab States as leading agencies and the secretariat of the Arab IGF as member. The Bureau takes major decisions related to the overall Arab IGF process. In addition to identifying the roles of partners, it is tasked with establishing an Arab IGF multi-stakeholder advisory group and selecting the host party for the Forum’s annual meetings. The Bureau also coordinates between key partners, the host and the advisory group on the preparations for the Forum’s annual meetings. It promotes the broad involvement of stakeholders in Internet governance on the one hand, and formal communication with policymakers on the other hand, with a view to ensuring the sustainability and success of the Arab IGF process.

The Arab Multi-stakeholder Advisory Group (AMAG) comprises representatives of all stakeholders in the Arab region and undertakes a number of tasks, notably the identification of the technical themes to be addressed at the Forum’s annual meetings. The Group was first established in 2012 and restructured in 2014 to include 34 experts representing stakeholders. The 2015 Group was set in April. The application for membership of the AMAG was kept open to encourage government representatives to be more involved in the development of the Arab IGF process.

Preparations for the Forum meetings include identifying a hosting entity. The host is designated on an annual basis by the umbrella organizations, ESCWA and the League of Arab States, 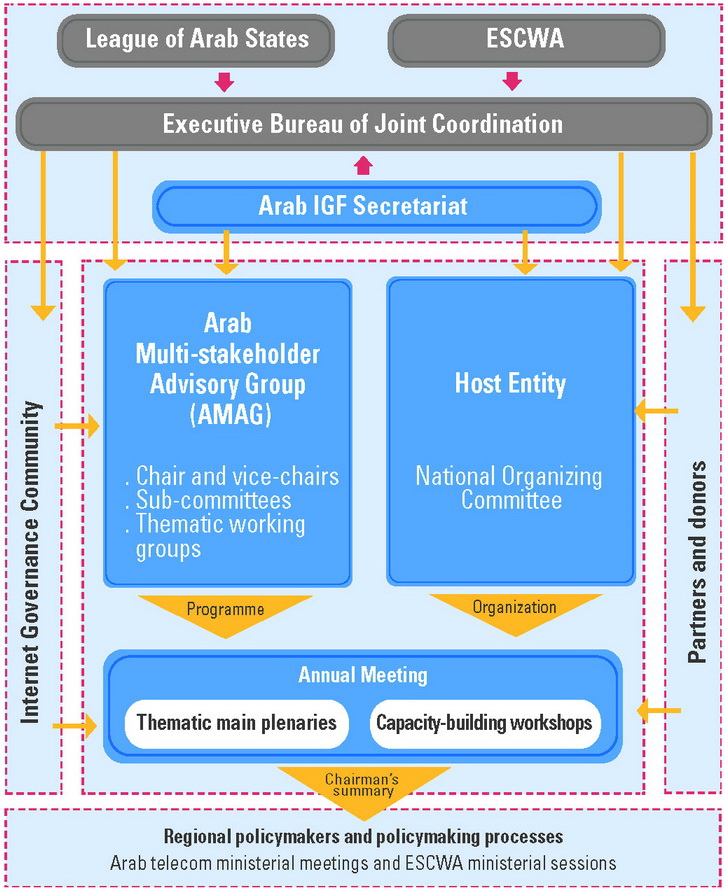 in coordination with the Arab IGF secretariat, during the meetings of the Executive Bureau of Joint Coordination.

Preparations for the annual meetings of the Arab IGF include the following stages: (a) establishment of AMAG; (b) identification by AMAG of the overriding theme, focus areas and agenda of the meeting; (c) selection of the host entity, following the adoption of hosting terms of reference to clarify roles, responsibilities and requirements; and (d) logistical and organizational preparations for the meeting by the host entity.
Since its inception in 2012, the Arab IGF has held three annual meetings:
The first mandate of the Arab IGF extends until the year 2015, following which scenarios for the next phase will be considered.